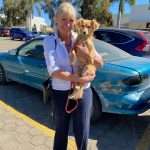 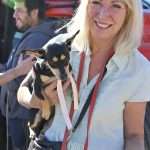 Shortly after moving to Mexico in June 2012, Collette took in the occasional foster and found local adopters. In October 2018, she began fostering on a regular basis after four puppies were left at the front gate of her development. The guards knew she loved dogs so they asked for her help. The Ranch helped her find homes for the pups. After that the gardener found another 4 puppies. Bone Voyage was just getting started and Cari (founder of BV) offered to send them North. She was then asked to foster for Bone Voyage when some pups were found in Jocotepec and the rest is history.

Collette started out with two dogs of her own and then three when a friend returned to the US. A fourth was added when she found a dog in the park and couldn’t find an adopter. Her thirteen year old dog sadly had to be put down and his spot was taken by a new dog who she couldn’t place. In September 2020, her lab passed away so she thought she would stick with a pack of three. I think we all know how this ends! Collette spent nine days volunteering at the Ranch and there was a puppy who had an enlarged heart and couldn’t fly North so he became part of her pack. Now she had a pack of four. After this, the founder of the Ranch had to return home due to Alzheimers and her six dogs needed to be rehomed. One was sixteen years old so that one also joined her pack. He is still with her and is a favorite with the puppy fosters. Today, March 19, she took in another senior dog, Jimmy, whose owner couldn’t take him back to the US., Collette now currently has a pack of six! Her dogs are wonderful about new fosters but they do enjoy the time when she’s not fostering and can focus on them.

She usually has two or three fosters at a time and right now she has two. The fosters stay anywhere from a few days to three months. The average stay is usually six to eight weeks. Collette says she cries every time a dog leaves her care. When they leave they take a little bit of her heart with them, but leave her with a lot of memories and the joy of knowing they will have a loving, forever home. She is very lucky that many adopters have kept in contact either on a regular basis as Facebook friends or occasionally sending her photos via Messenger. The adopters tend to be mainly from Canada. Unfortunately, when dogs are adopted out by US rescue organizations there is a tendency not to connect the foster with the adopter. This is why fosters and rescuers enjoy seeing the pictures and updates of dogs formerly in their care on the BV Happily Ever After Facebook page.

Collette was an active volunteer with BV from February 2021 through March 2022. She loved seeing the dogs get adopted. She was formerly a foster coordinator and headed up the team that inputs the bios and photos that appear on the adoption page of the website. She still has a few commitments that she is fulfilling, so she still has a foot in the administration world. She has also been a driver for the airport runs and checked in dogs at the airport. The one thing she will always do is foster. Those who know her know that she is a professional puppy addict!

It is dedicated volunteers like Collette that helps make it possible for Bone Voyage to find forever homes for abandoned or homeless street dogs in Mexico.